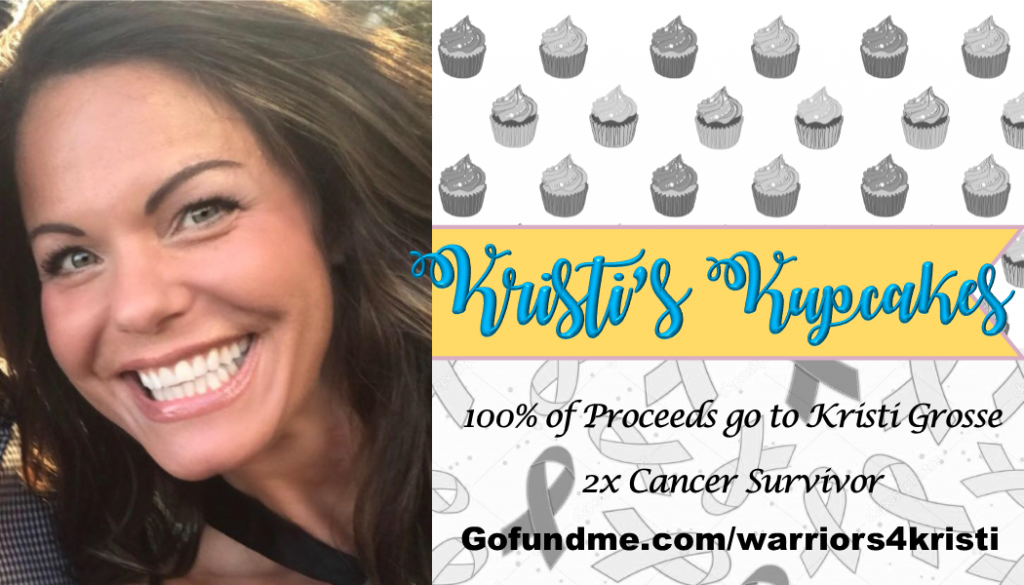 KUPCAKES that taste good AND do good?

We are proud to announce that starting each Friday we will be offering a special cupcake that does as much good as it tastes.

Owner Isabel McPartlin wants to share the story of a friend who these cupcakes will benefit. Kristi Grosse is a two time cancer survivor, animal advocate, health and wellness advocate, and is generous to everyone she meets.  Once again, this warrior of a woman faces adversity as Kristi learned that her brain tumor has returned and is currently undergoing radiation in the hopes that she won’t have to endure a second brain surgery.

Kristi first learned she had thyroid cancer at age 20 that spread to her lymph system. She had an extensive surgery to remove her thyroid, parathyroid glands and 21 lymph nodes. Then in her late 20s, the cancer returned. Kristi underwent a second round of surgery and radiation, during which she caught West Nile Virus. After years of treatments, and degeneration to her cervical spine from the thyroid radiation, she endured triple cervical artificial disc replacement. She faced a near-death situation when she caught double pneumonia during recovery. 10 very touch and go days in ICU in Germany, she persisted with a smile and resilient spirit.

While pursuing her Masters of Holistic Nutrition Kristi yet again was faced with adversity in the form of a lime sized brain tumor also caused from the thyroid radiation. She underwent brain surgery six years ago. January 9th, 2019 was set to be her sixth anniversary – a cause for celebration as the 6 year mark is considered healed with a slim chance of reoccurrence.  T o her surprise, the night before this celebratory date, she learned the brain tumor had returned. As she faced radiation yet again, her beloved 4 month old kitten, Maisel, had to suddenly be put to sleep for an incurable virus. With a broken heart, Kristi endured a very tough radiation treatment in February. And even still, she persisted with a resilient attitude. You will find Kristi at any given time smiling, laughing, without knowing the suffering she has endured.

We at Renegade BCS celebrate Kristi’s fighting spirit and want to give back to help offset the cost of her medical bills. Kristi absolutely LOVES cupcakes and says they are happiness held in your hand!  Every Friday we will be offering a cupcake combination picked by Kristi herself. The proceeds of these treats will go back to Kristi to help with her medical bills. You can support Kristi by buying these limited treats which will be announced every Monday.

Kristi also has a gofundme set up by the Yoga Pod class she instructs in Austin at https://www.gofundme.com/warriors4kristi

Thank you for your support and your sweet love for KUPCAKES for Kristi!

There are no upcoming events at this time.